"Very broadly speaking, there are 3 possibilities:
1. Shipman was completely innocent, and—for some reason—“stood in the way”
2. Shipman became aware, either because of A or B
2A:  Shipman was “pitched” and turn down some kind of offer; and so that’s how he became aware that something was afoot.\\
2B: Somehow Shipman learned that something was afoot. (But we don’t know how)
3. Shipman was “dirty” and was causing a problem (demanding more money, etc.)
Based  on your own interviewing (and that 3rd party researcher, “G” something), I tend to reject 3. Shipman was not dirty.
I doubt #1, because then there would be no need to murder Shipman.
So that leaves #2 (2A or 2B).
I believe that it was from Tyler Newcomb that I learned that the Washington Post published a small article on Shipman’s death in the Washington Post of 10/14 or 10/16. (Similar to item  in Frederick Maryland newspaper).  In fact, I was actually sent that article.
But Vince, here’s what you did not say, and that is focusing on a circumstance that is utterly incongruous (to me, anyway;
(a) This was a motorcade assassination;  and so. . :
(b) How was it possible for the Washington Post to publish an article on the death of a Secret Service driver, and not have that brought to the attention of the Warren Commission by the FBI?
I find that absurdly improbable.  So. . IMHO, the “fix” was in, with regard to suppressing that piece of news, the publication of which was surely considered a serious blooper by those involved.
Regarding “those involved”:  it his highly unlikely thither could be a “motorcade assassination” without the following 3 top level officials being complicit:
(a) The Secret Service Chief
(b) The head of the White House Detail
(c ) One or more of the two ASAICs—which, in this case, would mean Kellerman and/or Boring.
Almost certainly, a key person involved was Kellerman.
I have more to say on all this, but, another time.
IMHO: The death of Shipman —and the suppression of that published news item from any mention in the FBI’s Summary Report --are indicators that this was a radioactive situation.
The fact that the death occurred at Camp David, and the fact fact that Sam Kinney discovered the body is another indication.
So is the evidence that was adduced that a quick burial was urged.
The fact that Shipman indicated he would “pull out of line” if anything happened is another indication of his exposure to some kind of “foreknowledge”.
Shipman’s body should have had the whole array of standard toxicology tests.  But none of that took place.
Thanks again for providing the link. This is definitely a radio-active loose end, and I have thought so for years.
Many thanks.

DSL [David Lifton, author of Best Evidence and the upcoming Final Charade]
P.S. Re CD 3  (and most importantly, CD3/Appendix A): this was one of the very earliest documents that I ever ordered from the National Archives —circa 1967.
A wonderful source of very important information —especially, Appendix A, which details the decision making which led to the Trade Mart as the luncheon site.
Also keep in mind: if the SS wagon the up-and-up, the death of Shipman would definitely have been reported in CD 3.
Again: many thanks."

Posted by Vince Palamara at 7:10 PM No comments:


7  more agents from (at least) the Truman era:

Posted by Vince Palamara at 5:31 PM No comments:

One of JFK's main Secret Service drivers, Thomas B. Shipman, who died of an alleged heart attack at--of all places---Camp David, 10/14/63...before the 11/22/63 JFK assassination. His death brought a very inept William R. Greer to drive JFK to his death in Dallas. Read much more about this historic find of mine in:

Posted by Vince Palamara at 1:56 PM No comments:

I Am a Secret Service Agent: My Life Spent Protecting the President by former agent Dan Emmett

I Am a Secret Service Agent: My Life Spent Protecting the President


Dan Emmett was just eight years old when President John F. Kennedy was assassinated. From that moment forward, he knew he wanted to become a Secret Service agent, one of an elite group of highly trained men and women dedicated to preserving the life of the President of the United States at any cost, including sacrificing their own lives if necessary. Armed with single-minded determination and a never-quit attitude, he did just that. Selected over thousands of other highly qualified applicants to become an agent, he was eventually chosen to be one of the best of the best and provided protection worldwide for Presidents George Herbert Walker Bush, William Jefferson Clinton, and George W. Bush.
I Am a Secret Service Agent skillfully describes the duties and challenges of conducting presidential advances, dealing with the media, driving the President in a bullet-proof limousine, running alongside him through the streets of Washington, and flying with him on Air Force One. With fascinating anecdotes, Emmett weaves keen insight into the unique culture and history of the Secret Service with the inner workings of the White House. I Am A Secret Service Agent is a must read for young adults interested in a career in federal law enforcement.


"A heart-pumping account. . . . Readers will admire Emmett’s discipline, commitment, physical strength, and endurance." ―Publishers Weekly
"He . . . join[ed] the Presidential Protective Division to work both 'shift' assignments and on more heavily armed Counter Assault Teams during the Bush and Clinton administrations. . . . A tough job for tough-minded people―rewarding but with a heavy load of responsibility." ―Kirkus Review

MY AMAZON REVIEW:
5 stars out of 5: THE definitive memoir on the Secret Service BY a tremendous former agent!,

Former agent Dan Emmett has truly honored the Secret Service with the writing of this book. In my learned opinion, after studying the Secret Service for many years and reading dozens upon dozens of books related to the agency, this very fine book is the best one ever written and perhaps will never be matched. Many books on the agency are dry, clinical studies of the agency, sanitized chronicles of a perhaps too-safe perspective, or tabloid-type historical junk, high on controversy but low on true substance.

Dan Emmett has written a book for the ages. From 1865 to the present time, the Secret Service has stood guard over the nation's currency and/or its presidents. In this same period of time, only one agency-related book rises above all others: I Am A Secret Service Agent.

Well done, Agent Emmett. Thank you for your service to our country.

Posted by Vince Palamara at 10:05 PM No comments:

Building rooftops were regularly guarded BEFORE the JFK assassination! Just one of the many revelations to be found in my new book THE NOT-SO-SECRET SERVICE

Building rooftops were regularly guarded BEFORE the JFK assassination! Just one of the many revelations to be found in my new book THE NOT-SO-SECRET SERVICE: https://www.amazon.com/Not-So-Secret-Service-Agency-Kennedy-Assassination/dp/1634241207/ref=sr_1_5?s=books&ie=UTF8&qid=1477961936&sr=1-5 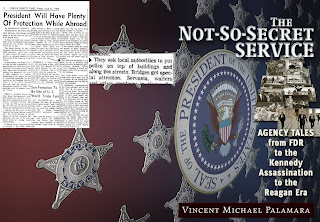 Posted by Vince Palamara at 6:29 PM No comments:

OH MY GOD---from a friend who requested anonymity:


"I asked the rep for Clint [Hill] what he charges for speeches he wants first class airfare n hotel paid for n speeches start at $10k."


STARTING AT 10,000 DOLLARS?!?!?! I know he has made a mint with his three books but wow! By the way- Hill and his co-author Lisa have officially been together since 2013 and now live together in San Francisco. LIKE I ALWAYS SAY: it is the people promoting the OFFICIAL story who make the money...the rest of us lose money or break even and, in any event, work for a living. Hill hasn't worked since 1975!


Posted by Vince Palamara at 4:46 PM No comments:

my new (third) book THE NOT-SO-SECRET SERVICE: AGENCY TALES FROM FDR TO THE KENNEDY ASSASSINATION TO THE REAGAN ERA

50 DOWN, 50 TO GO!!!!!!!!!!! I still have copies of my new (third) book THE NOT-SO-SECRET SERVICE: AGENCY TALES FROM FDR TO THE KENNEDY ASSASSINATION TO THE REAGAN ERA available to be signed and sent personally to you (the book is doing well on Amazon etc. but many people prefer the personal touch of an autographed copy). If interested, please send me a personal message here or send me an e-mail at vincebethel@yahoo.com ~~~ here is the Amazon site, too:

Posted by Vince Palamara at 6:49 PM No comments: