[many images below; text excerpts from my first book Survivor's Guilt (see chapter two for text in entirety and footnotes/sources) and, near the bottom, from my third book The Not-So-Secret Service]
Right-wing fanatic Joseph Milteer said something very profound to Willie Somersett on 11/9/63 in Miami: “Well, if they [the Secret Service] have any suspicion they do that [i.e. cover all office buildings], of course. But without suspicion, chances are that they won’t [emphasis added].”16 And so, the alleged lack of threats in Texas, especially Dallas, produced the desired results: security was stripped down.
Interestingly, PRS agent Glen A. Bennett, “temporarily assigned to the White House Detail,” rode in the follow-up car.17

In regard to Agent Bennett, the following is a detailed chronology, using many recently released documents, demonstrating the Secret Service’s pre-November 22 knowledge of threats to President Kennedy’s life, as well as the author’s discovery of a covert monitor of those threats put in place during the days and weeks before the assassination. This chronology further strains the credulity of the notion that one man, Lee Harvey Oswald, “got lucky” during the very same time that the agency assigned to protect his alleged victim were on the look-out for other threats on JFK’s life.
11/1/63: South Vietnam’s President Diem is assassinated in a CIA-backed coup.18
11/2/63: JFK’s trip to Chicago, Illinois is canceled at the last minute due to threats against his life:19 apart from subjects Thomas Arthur Vallee, Thomas Mosely, and Homer Echevarria, there was a team of four Cuban gunmen, two of whom eluded surveillance and escaped. Former agents Sam Kinney, Bill Greer, Robert Kollar, J. Lloyd Stocks, Gary McLeod, Robert J. Motto, Edward Tucker, David Grant, James Griffiths, Abraham Bolden, and Chicago SAIC Maurice Martineau told the HSCA that this trip was cancelled at the last minute – the excuses were varied: JFK had a cold (a repeat of the Cuban Missile Crisis alibi), Diem’s death (refuted by Salinger), the Thomas Arthur Vallee arrest, and others […]
11/8/63: Kennedy’s first, low profile trip to New York City.24 It is important to keep in mind that there were no PRS special agents, those administrative agents that monitor threats to the president, on this or any previous trip in 1963.

11/9/63: In Miami, Florida, FBI informant Willie Somersett tapes his conversation with Joseph Milteer about plans to kill JFK during a visit to Miami on 11/18/63. This is known by the Secret Service before Dallas, as SAIC Bouck told the author and as Secret Service records reveal.25

IN 2013, I FINALLY HAD PHOTO CONFIRMATION OF WHAT GLEN BENNETT LOOKED LIKE, THANKS TO THE OUT-OF-PRINT FORMER SECRET SERVICE AGENT'S 1990 BOOK "LOOKING BACK AND SEEING THE FUTURE" (PHOTOCOPY/BOOTLEG OF THE BOOK I OBTAINED FROM A FORMER AGENT WHO WORKED IN PRS WITH BENNETT!)

THE SAME PHOTO AS ABOVE, FROM RICHARD TRASK'S BOOK THAT DAY IN DALLAS: 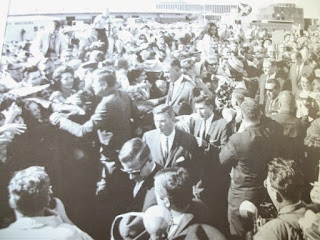 BENNETT SEATED IN THE BACK SEAT OF THE SECRET SERVICE FOLLOW-UP CAR IN DALLAS, LOOKING UP AND SIDEWAYS: 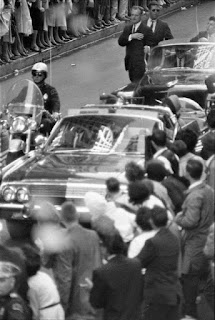 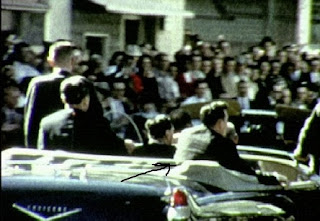 PRS Agent Glen Bennett is riding in the front passenger seat of the follow-up car, the spot traditionally reserved for the Shift Leader! I knew he rode the follow-up car in NY, FL and TX and this was mostly hushed up afterwards (and, with regard to Dallas, the INTENTIONS behind his placement there), but this is a new one on me. Other arrows- police lining street, good motorcycle formation, agent Don Lawton looks upward to scan buildings, Shift Leader Roberts BETWEEN Bennett and the driver, Kinney.FORTY members of the military police from Ft. Sam Houston, Texas:traffic control, motorcade route security, and intersection control;police helicopter utilized along route [other agents depicted: Ready, Hill; Powers taking home movies] 11/21/63 SAN ANTONIO, TX 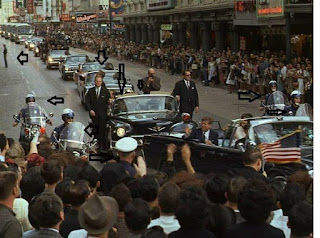 BENNETT LIES TO THE HSCA AND, WITH ATTORNEY NEARBY, SAYS HE WASN'T ON THE FLORIDA TRIP!! 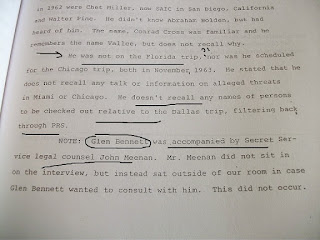 The evidence, the Secret Service shift reports (only released in the late 1990's), that demonstrates that Bennett was on all the stops in Florida! 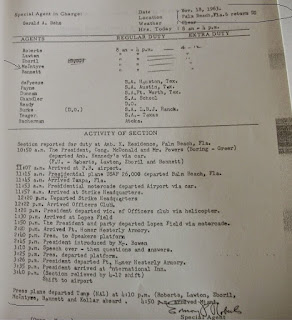 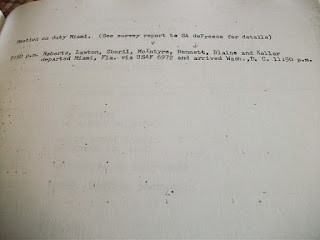 McIntyre (FAR RIGHT) and Bennett (next to JFK) in Miami: 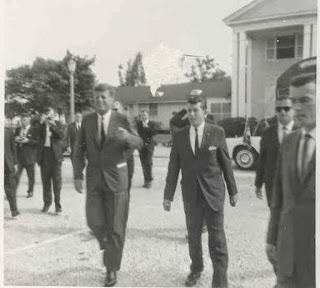 Yet, despite the photos above and the record, MCINTYRE ALSO LIES TO THE HSCA about both Florida AND Chicago!! it was only 15 years later and McIntyre was a young man and ACTIVE AGENT, as was Bennett, so forget the time and senility excuses. 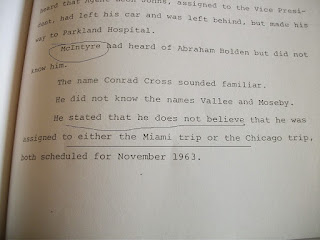 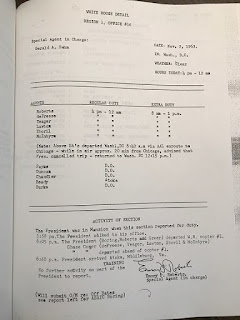 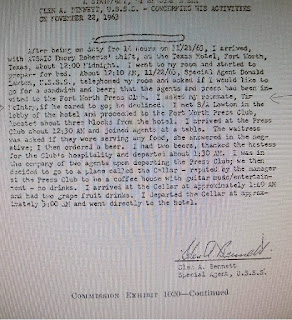 Discovered in early 2014, after publication of my first book, PRS (Intelligence Division) agent Glen Bennett admits being on the NY, FL, and TX trips. As revealed in chapter two from my first book, he lied under oath to the HSCA and stated that he was not on the Florida trip – he was on every single stop (Cape Canaveral, Palm Beach, Miami, and Tampa, often riding in the follow-up car)-and did not volunteer that he was also on the NY trip. Bennett’s presence on all these trips was only confirmed via document releases in the late 1990’s by myself.21 Bennett was a PRS agent – an administrative agent who monitored threats to the president and stayed back in D.C. His presence on these trips (and later denials) confirms my suspicions that he was a covert monitor of mortal threats to JFK’s life in-progress and that this was covered up afterwards for fear of reprisals from Congress and the public, as many people would cry out “wait – you knew there were mortal threats and plots to kill JFK and even had a special agent on these trips just for that purpose, yet Kennedy died?” Bennett rode in the follow-up car in Tampa and Dallas, as well. 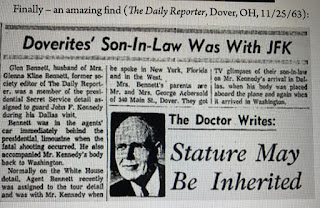 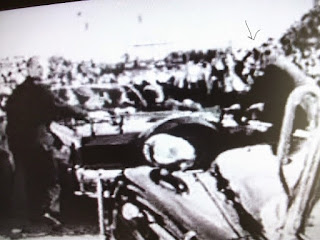 Bennett on the front right fender of the follow-up car (dark hair, sunglasses) scanning the crowds in Tampa: 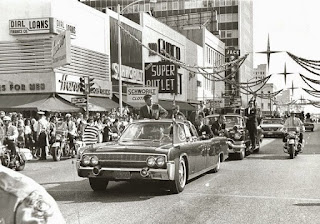 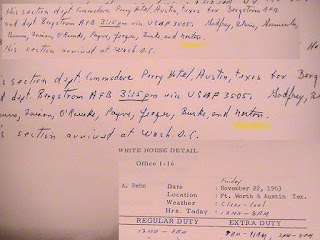 Posted by Vince Palamara at 7:33 PM No comments:

BUILDING ROOFTOPS WERE REGULARLY GUARDED DURING THE JFK ERA! ALSO, THE SECRET SERVICE WAS BOSS, NOT JFK

BUILDING ROOFTOPS WERE REGULARLY GUARDED DURING THE JFK ERA! ALSO, THE SECRET SERVICE WAS BOSS, NOT JFK
CLICK ON IMAGES TO ENLARGE (See also my first book Survivor's Guilt and especially the entire chapter devoted to this subject in THE NOT-SO-SECRET SERVICE)
Syndicated news story Summer 1963. Interestingly, many articles did not carry the highlighted information:

TAMPA, FL 11/18/63. Motorcycle officer Russell Groover confirmed to me that all multi-story buildings on the 28-MILE LONG MOTORCADE, the LONGEST DOMESTIC MOTORCADE JFK EVER UNDERTOOK (second only to the foreign trip to Berlin), were guarded by heavily armed officers. This Secret Service survey report was written by Frank Yeager and GERALD BLAINE OF KENNEDY DETAIL infamy! Author Larry Sabato, based on my tip (he acknowledges me in his book), contacted Blaine and called him out on this. Baine lamely stated that they didn't have the manpower in Dallas----a far shorter motorcade---to do what they did four days earlier in Tampa:

Former Secret Service Chief U.E. Baughman, author of the 1962 book SECRET SERVICE CHIEF, came clean in early December 1963...I guess this is why he wasn't called before the Warren Commission:

Nashville Agent Paul Doster, a former JFK White House Detail agent, told the "Nashville Banner" back on 5/18/63:
"a complete check of the entire motorcade route" was done.  Also, Doster noted that "Other [police] officers were assigned atop the municipal terminal and other buildings along the route. These men took their posts at 8 a.m. and
remained at their rooftop stations until the president and his party
passed."


UPDATE: The 2013 book from the Nashville Tennessean JFK IN NASHVILLE provides the corroboration/ text in question and more:

In keeping with Baughman's comment above, the Secret Service was the boss, NOT THE PRESIDENT, when it comes to security:
From a 11/15/63 AP news story syndicated nationwide:

LBJ said so, as well (including some disturbing info on agent Emory Roberts)

In 2010, with KENNEDY DETAIL author Gerald Blaine sitting beside him, Clint Hill came clean and confessed on video:
https://www.youtube.com/watch?v=Xs7yNVI9sOM
Secret Service Agent Clint Hill lets the truth slip: “He can tell you what he wants done and he can tell you certain things but that doesn't mean you have to do it. What we used to do was always agree with the President and then we'd do what we felt was best anyway."
Hill would know- he "disobeyed" the phony presidential "order" on Main Street:

Posted by Vince Palamara at 7:18 PM No comments: 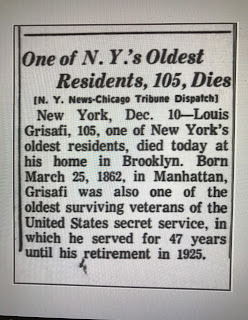