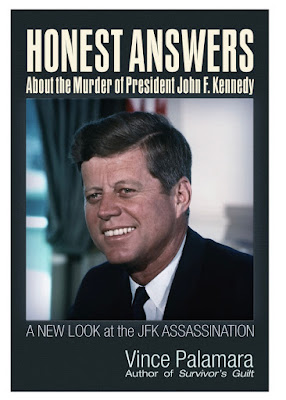 Labels: "HONEST ANSWERS ABOUT THE MURDER OF PRESIDENT JOHN F. KENNEDY: A NEW LOOK AT THE JFK ASSASSINATION" (2021)

"HONEST ANSWERS ABOUT THE MURDER OF PRESIDENT JOHN F. KENNEDY: A NEW LOOK AT THE JFK ASSASSINATION" (2021)

"HONEST ANSWERS ABOUT THE MURDER OF PRESIDENT JOHN F. KENNEDY: A NEW LOOK AT THE JFK ASSASSINATION" (2021)


My best book---coming next year!
Posted by Vince Palamara at 5:44 PM No comments:

Labels: "HONEST ANSWERS ABOUT THE MURDER OF PRESIDENT JOHN F. KENNEDY: A NEW LOOK AT THE JFK ASSASSINATION" (2021) 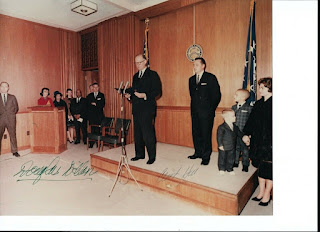 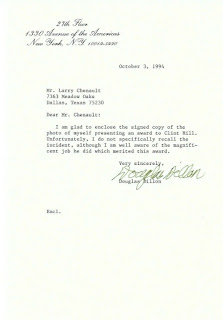 Posted by Vince Palamara at 4:32 PM No comments:


"Slide down the [GUY] banister, go get your coat


[DAVID] Ferry 'cross the Mersey and go for the throat


There's three bums comin' all dressed in rags [THE THREE TRAMPS]
There's a party going on behind the Grassy Knoll [CONSPIRACY/SHOOTERS PLURAL]
Put your foot in the tank and then step on the gas
Try to make it to the triple underpass [GREER AND THE SLOWING OF THE LIMO]
Being led to the slaughter like a sacrificial lamb
He said, "Wait a minute, boys, you know who I am?"
"Of course we do, we know who you are!" [SECRET SERVICE...BETRAYAL?]
What is the truth, and where did it go?
Ask Oswald and Ruby, they oughta know
We've already got someone here to take your place [LBJ]
Thousands were watching, no one saw a thing
It happened so quickly, so quick, by surprise
Right there in front of everyone's eyes
Greatest magic trick ever under the sun
Perfectly executed, skillfully done
Hold on, I've been led into some kind of a trap
They mutilated his body and they took out his brain
What more could they do? They piled on the pain [LIFTON BODY ALTERATION THEORY]
Throw the gun in the gutter and walk on by [STORM DRAIN THEORY]
That magic bullet of yours has gone to my head [SINGLE BULLET THEORY]
I'm just a patsy ["I'M JUST A PATSY"-LHO] like Patsy Cline
Never shot anyone from in front or behind ["I DIDN'T SHOOT ANYONE, NO SIR"]
Zapruder's film I seen night before
They killed him once [ASSASSINATION] and they killed him twice [CHARACTER ASSASSINATION]
Play it for that strip club owner named Jack [RUBY]
Don't worry, Mr. President, help's on the way
Your brothers are comin', there'll be hell to pay [AG RFK, TEDDY]
----------------------

Posted by Vince Palamara at 7:04 PM No comments:

THE JFK ASSASSINATION UNCOVERED: HONEST ANSWERS AFTER ALL THESE YEARS ABOUT THE MURDER OF PRESIDENT JOHN F. KENNEDY


THE JFK ASSASSINATION UNCOVERED: HONEST ANSWERS AFTER ALL THESE YEARS ABOUT THE MURDER OF PRESIDENT JOHN F. KENNEDY

Labels: THE JFK ASSASSINATION UNCOVERED: HONEST ANSWERS AFTER ALL THESE YEARS ABOUT THE MURDER OF PRESIDENT JOHN F. KENNEDY

The "dead" Secret Service agent (or a person of interest)

FROM MY FIRST BOOK:
20 H 410/ SETH KANTOR REPORT: "A Western Union man who had been with us since we came down from Andrews Air Force Base came into the [Parkland Hospital] office. A nurse asked him about a report that a Secret Service agent had been killed out on the street. HE SAID THAT IT WAS TRUE. This was one of the immediate rumors which sprang up. It took several days for this particular rumor not to be believed in Dallas itself (FELLOW IN JAGGARS-CHILES-STOVALL who got it from a friend who got it from a POSTMAN* supposed to have been at the death scene that the shot and bleeding SS man was in on the plot to kill the President.)" [emphasis added]

*the 1/22/77 issue of "The Continuing Inquiry" contains an article written by Penn Jones and Gary Shaw re: the "dead" agent incident as reported in a letter sent to Jim Garrison during the Clay Shaw trial:
"A Mr. Robertson, Assistant Director of the Dallas or Fort Worth Secret Service office, confided to [friend of writer who requested anonymity] in 1963 that a plot to kill President Kennedy was planned and he did not want any part of it. On November 22, 1963, my friend was in the office of Mr. Robertson when all phones began to ring, about the time Kennedy was arriving at Carswell Air Force Base [in Fort Worth], Mr. Robertson then said, 'Well, this is it' and left the office. Since that time Mr. Robertson's family of seven children and wife have not seen or heard from him, yet his paychecks continue to be mailed to his home."
Jones/ Shaw: "Our 1965 investigation led us to believe Robertson was in Dallas but was posing as a POSTAL INSPECTOR, but it was reported to us that he had left Dallas. We also learned from newsmen that something unusual did happen on Harwood [street] shortly before the turn to Main Street. No one wanted credit for this, but we were told by reliable newsmen that a man jumped in front of Kennedy's car on Harwood shouting, "Stop, I must tell you." The man, according to their report, was promptly wrestled to the ground and hustled away." [emphasis added]

----- To my great surprise, there are three reports that corroborate the above article, in conjunction with the overlooked Kantor report:
The first is the actual LETTER sent to Garrison from an "Amy Britvar" dated 2/21/68 and originating from Turtle Creek Blvd. in Dallas, TX. [thanks go to John Armstrong and Jack White for the copy of this letter]! An internet people search for Britvar drew a blank, although there ARE other Britvars in Texas (further work will be done on locating this person).

The second is a Treasury Department (U.S. Customs Service) document, dated 1/17/80, from Joseph G. Forrester, U.S. Customs, to Attorney General Benjamin R. Civiletti [thanks go to John Armstrong and Ed Sherry for this document; see above image]. The letter reads in part:
"My interest in the Kennedy murder started in 1966 when I met an Air Force Master Sergeant at St. Albans Naval Hospital, Queens, New York.
This sergeant, an elderly man, was suffering from terminal cancer. He stated that on November 22,1963 he was attached to Air Force One as an electronics technician. He further stated that after the President was shot a message was received over a military frequency that multiple assassins had attacked the President...a Secret Service agent. Mr. Robertson, stationed in the Dallas-Fort Worth area disappeared on November 22,1963, yet his family still receives his paychecks. The disappearance of an individual is not unusual except that it has been said that Mr. Robertson became aware of an assassins plot against the president. An assassin plot had been unearthed in Chicago a short time before President Kennedy's Dallas trip. Please do not misconstrue this letter. I am not a crank; but I am sincerely interested in this crucial investigation. I am willing to join an investigative team and if that is not possible, will make myself available for an interview by investigative officers."

The third is a lengthy memorandum written by Vince Salandria, dated 1/31/67, regarding an interview with Rita Rollins, a Navy Nurse with an interesting story to tell.---the crucial part in question reads as follows:
"The name of the person in Dallas...is Inez Robertson. CHUCK ROBERTSON, HER HUSBAND, WORKS AT THE POST OFFICE...Inez Robertson, actually saw them [men with guns] make a breakdown of the rifles. This tall man with long grey or white hair[-]he was in the station wagon. There is a luggage rack on the station wagon. It was a Rambler station wagon. This fellow with the mixed grey hair carried them [the armed men] to the airport...This tall man had been around Dallas the day before the assassination...THIS EPISODE HAS CAUSED FRICTION BETWEEN CHUCK ROBERTSON AND INEZ ROBERTSON. HE IS NOT IN DALLAS NOW." [emphasis added]

The Kennedy Detail Exposed- the real story about JFK’s Secret Service by Vince Palamara 11/22/19, Dallas, TX (seventh annual JFK assassination conference). President Kennedy should have survived 11/22/63. Introduction by Don Ratliff. I met Oliver Stone at the conference (I was followed by author/actor/ director Sean Stone, son of Oliver Stone, who was in the audience, along with many other authors and researchers in 2016). The Q & A session at the end included fellow TMWKK participant Ed Tatro, among others.
Posted by Vince Palamara at 7:49 PM No comments: