Oswald did it...and JFK helped, too? MY 2010 AMAZON REVIEW OF "THE KENNEDY DETAIL"

Oswald did it...and JFK helped, too?


As the leading civilian authority on the Secret Service, especially regarding the JFK/ LBJ era, and as someone who interviewed and/ or corresponded with close to 80 former agents between 1990-2006 (roughly double the number of former agents interviewed for this book), I was, needless to say, very much interested in what former agent and author Gerald Blaine (a nice gentleman I spoke to twice and corresponded with several times via e-mail), along with co-author Lisa McCubbin and fellow former agent Clint Hill (a very close friend of Blaine's to whom I had sent a 22-page letter to and spoke to very briefly and who also wrote the Foreword), had to say about President Kennedy and the tragic events of November 22, 1963, when the Secret Service failed in the worst way, costing the nation the life of our President. As a total stranger and an outsider, my contacts with the former agents were very much in the "cross examination" mode (often eliciting begrudging, not-too-friendly responses), while, as a trusted insider, it is fair to say that Blaine's contacts would be of the "direct/ friendly examination" variety. This dichotomy will become important for a number of reasons.

I am as certain as a human being can be that it was my lengthy letter to Clint Hill that led to the genesis of this book----I sent it in June of 2005 and received a very cantankerous "non-reply" when I phoned the gentleman this same time period. Also, during this very same time period, as Blaine admitted to the Daily Sentinel's Bob Silbernagel for his 5/23/10 article, Blaine began contacting as many living former agents who served President Kennedy for his book as he could (it is important to note that I also made contacts with Mr. Blaine during this time period, as well). Why am I so certain that my letter was a catalyst? As an ardent critic of the Secret Service's performance in Dallas (going much further than the two government "investigations", the Warren Commission and the HSCA), I sent Mr. Hill, in effect, a "Cliff Notes" version of my research for my own book ("Survivor's Guilt: The Secret Service & The Failure To Protect The President"), spelling out why I came to be certain that fellow former agents Floyd Boring (the number two agent on the Kennedy Detail and the Secret Service planner of the Texas trip), Shift Leader Emory Roberts (the commander of the agents in the follow-up car in Dallas), and William Greer (the driver of JFK's limousine on 11/22/63) were grossly negligent before, during, and after JFK was assassinated. Judging by Mr. Hill's "response" (or lack thereof), my attempt to address my concerns did not go over very well, to put it mildly.

As it bears directly on "The Kennedy Detail" , just what specifically are my concerns? Simply put: many of these former agents (and several White House aides), including several who passed away years before this book was even a thought, such as the number one agent on the Kennedy Detail, Gerald Behn; one of the three Shift Leaders, Arthur Godfrey; the number two agent on LBJ's detail (who ALSO had protected JFK), Rufus Youngblood; Sam Kinney, the driver of the follow-up car in Dallas; Robert Bouck, the Special-Agent-In-Charge of the Protective Research Section; Frank Stoner of the Protective Research Section; Maurice Martineau, the Acting-Special- Agent- In- Charge of the Chicago Office who protected JFK from '61-'63 whenever he came to the area; John Norris of the Uniformed Division; Dave Powers, the former curator of the JFK Library who rode in the follow-up car many times, including on 11/22/63; author Helen O'Donnell, daughter of the late Ken O'Donnell, JFK's Chief of Staff (based on her memory and her father's many audio tapes); and many others, told me, in no uncertain terms, that President Kennedy was a very nice man, NEVER interfered with the actions of the Secret Service, and, most importantly, DID NOT ORDER THE AGENTS OFF HIS CAR (nor did O'Donnell, as verified by the aforementioned Helen O'Donnell, Art Godfrey, and Sam Kinney and, by extension, Dave Powers)! With regard to the Tampa, FL trip of 11/18/63, not only do many existing films and photos all along the long motorcade route depict agents on the rear of JFK's car, Congressman Sam Gibbons, who RODE IN THE CAR WITH JFK, told me that he heard no such order from JFK for the agents to be removed in the first place AND that the agents rode the rear bumper all the way. Surprisingly, the number two agent, Floyd Boring (who passed away 2/1/08 and to whom I spoke to twice and corresponded with once), told me the same thing: namely, that the "Get-The-Ivy-League-Charlatans-Off-The-Limo" tale (first told by the late author William Manchester, who had interviewed Gerald Blaine, Clint Hill, and Emory Roberts, but not Boring) is false---Boring never said that to him, never spoke to Manchester in any case, the tale is not true, and that, once again, JFK was a very nice man, very cooperative with the Secret Service, and never interfered with their actions at all! Agents of the Kennedy Detail who conveyed similar knowledge to myself---that JFK never interfered with their actions--- were Walt Coughlin, Winston Lawson (the lead advance agent for Dallas), Don Lawton (who rode on the rear of the car 11/18/63), Abe Bolden, Robert Lilley, Frank Yeager, Gerald O'Rourke, Sam Sulliman, Vince Mroz (now deceased), Larry Newman, and, quite surprisingly, Gerald Blaine himself, a little over a year before he began writing his book!

Although very well written, along with some nice photographs, as well, "The Kennedy Detail" is really a thinly veiled attempt to rewrite history (a la Gerald Posner and Vince Bugliosi, who believe 11/22/63 was the act of a single lone man) and absolve the agents of their collective survivor's guilt (and to counter the prolific writings of a certain reviewer). In the eyes of those from "The Kennedy Detail", the assassination was the act of TWO "lone men": Oswald, who pulled the trigger, and JFK, who set himself up as the target. Simply put: President Kennedy WAS indeed a very nice man, did not interfere with the actions of the Secret Service, did not order the agents off his limousine (in Tampa, in Dallas, or elsewhere), and did not have his staff convey any anti-security sentiments, either. The sheer force and power of what these men all told me, a complete stranger, in correspondence and on the phone, is all the more strong because, not only did they have a vested interest to protect themselves, the vast majority believe that Oswald acted alone and that all official "stories" are correct. Floyd Boring, as agency planner of the fateful trip, in spite of what he forcefully stated to me, did indeed convey the exaggerated---some would say false--notion that JFK had asked that the agents remove themselves from the car 4 short days before Dallas, taking it upon himself to tell several Dallas agents, depending on who you choose to believe, either as an "anecdote" of alleged presidential kindness and consideration in not wanting to have the agents "over exert" themselves (what Boring told the ARRB's Doug Horne in 1996) or a strict "presidential admonition" to stay off the car (as Clint Hill conveyed to the Warren Commission's Arlen Specter, under oath, in 1964). In addition, the motorcycle escort was reduced to (as the HSCA put it) a "uniquely insecure" smaller formation for Dallas, allegedly because, as Boring told the ARRB (and as Win Lawson, assigned to the Dallas trip by Boring [and who would have been merely following orders], told the Warren Commission under oath), JFK allegedly didn't like alot of noise from motorcycles, although he had no problem in countless prior motorcades, including that very same morning in Fort Worth and the day before in San Antonio and Houston. Emory Roberts ordered an agent back from JFK's limo at Love Field (as this reviewer discovered back in 1991 and had popularized for the first time back in 1995 and, again, in 2003 on The History Channel, long before this clip became something of an internet sensation), recalled an agent during the shooting and, as Sam Kinney told me, ordered the men on the follow-up car not to move! For his part, Bill Greer slowed the President's car down during the shooting, twice looked back at JFK, and disobeyed Roy Kellerman's order to get out line (and denied all of this to the Warren Commission). Coupled with several---many?---of the agent's stated anger about JFK's private life (as stated to author Seymour Hersh, among others), these actions, inactions, and feelings are cause for concern.

That said, the vast majority of these men (Blaine included) are honorable former government employees that were merely following orders on that fateful day in Dallas. In light of the work of this reviewer, future pensions, professional and personal reputations, and so forth, "The Kennedy Detail" makes perfect sense. After the reviewer's letter to Clint Hill, it truly WAS "a book that HAD to be written".
Posted by Vince Palamara at 12:10 PM No comments: 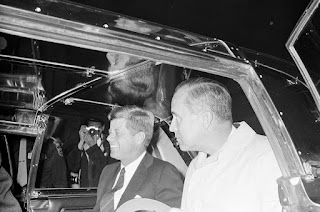 Posted by Vince Palamara at 7:20 PM No comments: